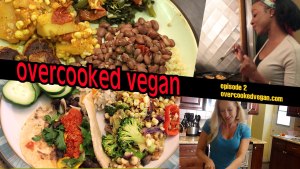 How much time does it take to make a carrot? Click the mofo and find out, mofo!

With Episode 2 launched into the internet ethers as of an hour ago I’ve pondered which things I’ve learned over the years still apply. Technically there are several areas that I can pay more attention towards as the repetition builds. Presently the productions are about the same time as the food preparation and the actual cooking. That makes my approach more eng-style but I have to find the balance with the beauty shots. The sound is less of importance to me at the moment because I KNOW right now I’m getting the best I can with what I have. I will be tweaking the approach but there does come a time when you know practical limitations.

As a producer, I’m running into far too many cancellations. Yesterday’s cancellation was the only legitimate one in the last four weeks. The penultimate one was 25 minutes or so before shoot time. When there is no leverage (agency pressure, remuneration, etc.) you really become reliant on the trustworthiness of anonymous people. That is probably not a successful model for goal attainment; Just ask the $4.30 head of cauliflower that didn’t get to make its onscreen debut because of said cancellation. Sifting through other methods of talent acquisition becomes a secondary priority.

Oddly, the first priority is the same one with any business: Marketing, promotion. I soft launched episode one with the biggest pillow possible. I might have sent 2 or 3 tweets and a couple of posts from here or there. Maybe a couple of emails went out to a couple of people. My dilemma was proper launch or get it out then play catch up. They arguably will cost the same amount of time but the immediate effects are different. Getting an episode into the world meant that people who didn’t understand the premise, now understand it better and have made verbal commitment to participate. It doesn’t necessarily stimulate a timeliness to their participation. That is like watching a cold molasses run versus paint drying in a thunder storm race. Launching also means I have to show hit reach and whatnot to whom it might concern sooner but that’s closer to speculating with Santa might bring me for Flag Day. I’m more of a peddler than a pitch man anyway but that helped facilitate the decision.

So, things are coming, it’s just uphill both ways. I have to get my jet packs fixed.