Tabula Rasa. “Chungking Express” was my first Wong Kar-Wai flick. I saw that movie in the theater with a woman like seeing it with a homeboy. We went there to see a movie and that was that.

We both were in our personal situations, enjoyed the movie for what is was and never saw nor spoke to each other again. I’m blanking on her name right now. I think I might have blanked on it as soon as she walked away.

“Chungking Express” led me to immediately scrounge for all of dude’s prior flicks. In a pre-Netflix age, I found myself driving to video shops in Alhambra, Rosemead and Monterey Park to piece together my new favorite director as Tsukomoto Shinya and Suzuki Seijun were between releases. My first movie that I saw with one of my sisters was “In the Mood for Love”, her first foreign film. But everything comes back to that pineapple question.

On the phone, I do recall (I want to say her name was Carol) that I thought it was an action flick but I couldn’t verify that. Every thing else is a blur leading up to it because in the movie I was immersed in the atmosphere and cinematography. I ordinarily would tire of weepy characters but I was in a unique position for myself where I could sympathize with the characters. 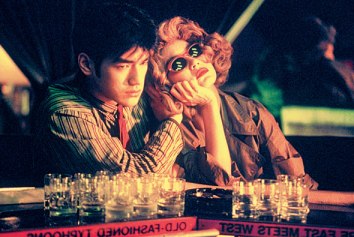 This isn’t how I planned my birthday

For those who haven’t seen it, it’s two stories, 1 film. The first story is a cop who has been broken up with his girl for awhile starting to face the reality that she’s really his ex-girl for a very long time. He winds up drunk with 30 cans of pineapple and commiserating with a female hustler in need of an immediate change in geography. The second story is a cop who experiences a break up and is slow to understand that someone has taken interest in him.

Both stories involve stain of, resistance to, acknowledgement of change. The pineapple has a familiar in the other segment also. Together they signify the simple bridges to the cosmology of inevitability and the symmetry of one’s acceptance of it. It’s not a “New Year’s Eve” movie but it functions as such. Also, that’s my long winded way of welcoming you to the coming 365. I’m not much of a ritualist, but have a happy one. You might as well.