“Strangely” after helping a dude in need by loaning him my tools, the megafunk-mobile disappeared with him. During its absence, I was accused of hamstringing a person’s new project who had an unpaid balance for 9 1/2 months. 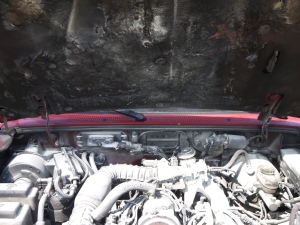 Horse thieves used to get hanged.

I was accused by all kinds of loons because my dominant interest doesn’t orbit the egocentric universe known throughout the cosmos of entitlement. Simultaneously, another well-adjusted (*cough*) entity resurfaced after a year feigning interest in my existence to purr inquiries into how she might be able to juice some sucker to her advantage. “Call me, babe!” No thanks. Then multitudes more popped up with their succubus-like  requests. These represent a small sample size of my weeks on foot.

Two and 1/2 weeks later, the stripped* machine was found within the adorable confines of the police impound in the wonderful city of Inglewood. Inglewood has always loved me like a stripper. And because I’m always prepared for the absurd, my engine caught fire right as I was about to leave the tow yard parking lot. To one of the dude’s credit, vehicles combusting into flames must be a norm in his work so at my request he popped out of his office and covered my engine with enough fire extinguisher retardant so that it looked like a reenactment of post Vesuvius Pompeii.

There’s a difference between help and Wimpy.

Getting back on the road took a better mechanical eye than mine. Fire burns up things. Fortunately, it was relatively minor work to get things back on deck but that came from a handful of good people coming through for me. “That’s GAWD coming through for you!” some non-contributing materialist blurted.  My response to her was colorful.

Now, I got help. I needed help. But I didn’t expect nor feel entitled to anyone’s help. That’s not Wimpy. That’s not tricking. That’s not sociopathy prompted by abject narcissism. The Bicycle Thief was an early film about the cycle of poverty and the social dysfunction it affects in concentric fashion. I’ve always viewed it as a horror movie.

As it is, I’ve had to press harder to make up for the time loss and mounted-stress since the horse thief dented my schedule. A lot of it is hurry up and wait and there’s additional frustration with that. But the ingredients to progress many times contain things that have to be overcome with limited discernible explanation nor seeming end. Endure.